I belong to the famous Poolakkal taravad of Calicut, in Kerala, South India. Taravad (in the local dialet) means an ancestral home, or a joint family. In case you wonder what is so queer about a joint family click on Taravad.

It is on this theme my novel "Taravad - An Ancestral Story" is based.  It is a pulsating novel set in the backdrop of early twentieth century when Malabar was under the control of British Empire. For rituals, customs and life in the last century, I did an exhaustive research in several historical books such as Malabar Manual (1887) by William Logan, Nayars of Malabar (1901) by F.Fawcett, Native Life in Travancore (1883) by Rev.Samuel Mateer, F.L.S, The Pirates of Malabar (1907) by Colonel John Biddulph and The Christians of St. Thomas (1908) by Rev. W.J. Richards, DD which paved way for a firm historical background.

I had always been curious about the weird customs and practices such as child marriage, serpent dance, untouchability, caste-trials, divorce proceedings, death rites, religious festivals, etc. that existed in the erstwhile province of Malabar in Kerala amongst the Nair families during the last century, and did an extensive research on the subject.   Being a Nair myself, I was familiar with many rituals, and I decided to use them as background for my debut novel. 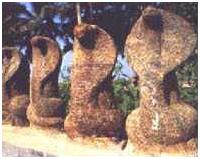 Of the various kinds of primitive worship still practiced in the country that of the serpent occupies a prominent place. Serpent is deified and offerings of puja are often made to the reptile. Each household in the olden times had its own serpent deity possessing large powers for good as well as for evil. A separate spot is set apart in the house compound as the abode of these deities. We had our own temple, where serpents were worshiped.  This temple is now open to public.

Read about serpent worship in the novel Taravad - An Ancestral Story.